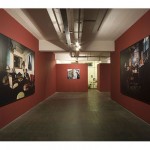 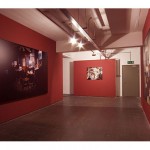 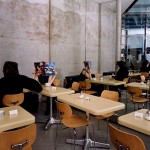 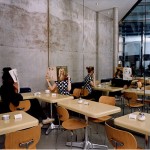 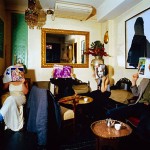 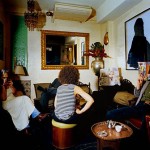 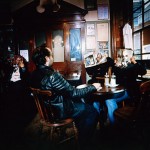 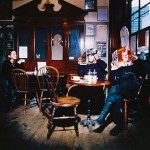 Earthling 2 was a photographic work that followed Earthling 1. In these pictures three locations were scouted: 1. Market Cafe near Spitafields market – a traditional British pub cafe, 2. Hookah Lounge, located on Brick Lane – a Middle Eastern smoking and tea lounge 3. Cafe Bravo – a modernist cafe located at KunstWerke in Berlin. In these staged images actors were given magazine covers from my own archive of 20th century magazines and newspapers. These magazines became optical/cultural apparatti. The magazines were altered by cutting out one or two of the eyes of the person on the cover. The size of the aperture and its location corresponded to the actors eye size and the displacement of the eyes from each other. Thus the optical axis of the physical eye and the magazine eye were lined up. In the case of the Cafe Bravo the mirror wall created another level of displaced looking and unveiling, since we see both sides of the magazine.
«Previous Work
Next Work»