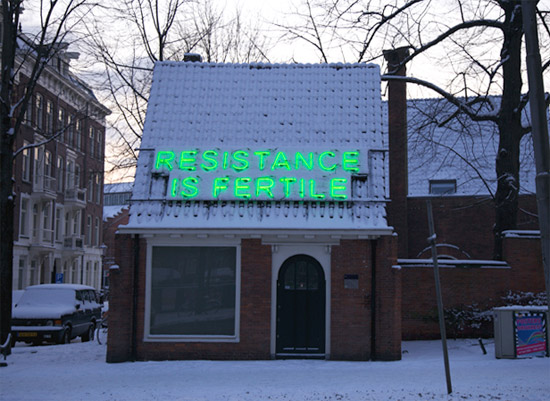 Two neon signs are superimposed one upon the other. One in green says "Resistance is Fertile", while another one in red says "Resis tance is Futile". When one sign is lit, the other statement is quiescent.

In correspondence with the traffic lights down the road, the message jumps between action and passivity, between motion and standstill, hope and disbelieve. It is a gesture of double-mindedness and hesitation between two opposites, while there’s no middle course.

Located along a busy street in Amsterdam (Stadhouderskade), the work involves passers-by, cyclists and chauffeurs into a public negotiation that may seem political and topical, yet as significantly applies to a variety of situations we encounter in our daily private lives. At the same time the work functions as an ironic slogan in the midst of other lit textual signs and marquees aiming at selling goods and communicating political and social gestures.

The work of Warren Neidich lies at the crossroad between art, philosophy, politics and neuroscience, something he refers to as 'Neurobiopolitics' and 'Neuropower'. The work Resistance is Futile / Resistance is Fertile, 2006 - 2012 stems from his ongoing research on the modes and meaning of cognitive work in our contemporary society. Warren Neidich states: "As late capitalism directs its attention towards immaterial labor and cognitive work, the functioning of mind and brain are gaining importance for the production of capital. While the pharmaceutical market of attention and memory drugs is booming, the use of special effects in films and currently also in advertising and sports news programs hyper-stimulate emotional centers located deep in our primitive brain, producing an over excited and labile subject. Additionally, the new field of consumer neuroscience in which computerized scanning machines track the brain’s responses to product choice and political personages, create new forms of post-phenomenological consumerism, in which stimulation of the part of the brain essential to our decision making processes is influenced in order to produce a new form of desiring subject. These and other elements of our contemporary information society, have a significant effect on the way our brain works by bypassing the distributions of sensibility that organize our sensorial world - in the end producing a super supple, normalized and excitable subject in whom resistance is unfeasible and discontent and occupation movements impossible to conceive."

Resistance is Fertile / Resistance is Futile was first presented at the Kunsthaus in Graz, as part of the exhibition Protections (2006) curated by Adam Budak and Christine Peters.