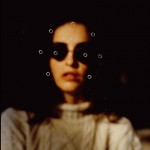 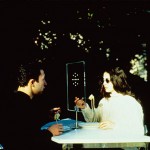 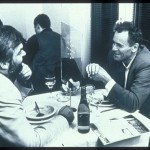 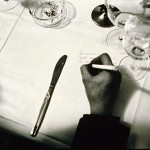 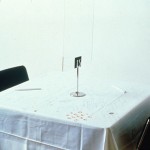 Tabula rasa is a piece of plastic with 9 holes drilled into it. The holes mimic the teller windows of banks and passport control places, ostensibly designed to prevent the spread of germs and provide security. These were placed on small dining room tables shared by two people. At the Chelsea Hotel in Köln 20 people were invited to have dinner, 10 tables were set and a 5-course meal was served. At the termination of each course people were asked to write down on the tablecloth the most important thing that came up during their conversation. They were then asked to rotate to another table. At the end of the dinner, the white table clothes were covered by 10 written statements along the food and wine stains. They were exhibited the next day.
«Previous Work
Next Work»